← more from
Pi Recordings
Get fresh music recommendations delivered to your inbox every Friday.

Holding It Down: The Veterans' Dreams Project 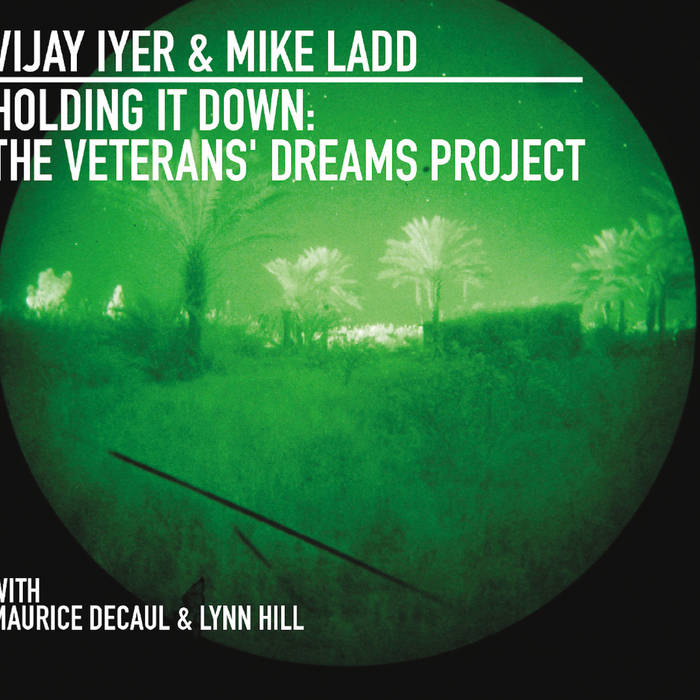 Holding It Down: The Veterans’ Dreams Project is the latest album to emerge from the ongoing collaboration of Grammy-nominated pianist/composer Vijay Iyer and poet/performer/librettist/emcee Mike Ladd. Resulting from a project over three years in the making, the new recording focuses on veterans of color from the last decade’s wars in Iraq and Afghanistan. Holding It Down is a thought-provoking, sometimes frightening, and ultimately exhilarating combination of music, poetry and song, created from the actual dreams of young veterans of the Iraq and Afghanistan wars.

The new album continues in the groundbreaking, politically searing, stylistically omnivorous fashion of their previous works (In What Language? (2003-04) and the acclaimed Still Life with Commentator (2006-07)). These earlier projects were described by The Boston Globe as “a triumph of a genre that doesn’t exist,” hailed by JazzTimes as “unfailingly imaginative and significant,” and praised by Rolling Stone for their “powerful narrative invention and ravishing trance-jazz… an eloquent tribute to the stubborn, regenerative powers of the human spirit.” Taken together with these earlier Iyer-Ladd creations, Holding It Down rounds out a wide-ranging trilogy, spanning more than a decade of post-9/11 American life during wartime.

The artists and Pi Recordings will donate profits from the project to charities benefiting post-9/11 war veterans.

n Holding It Down, Iyer and Ladd explore the experiences of veterans of these post-9/11 wars through the medium of dreams. For Holding It Down, Ladd and the project’s director Patricia McGregor interviewed American veterans of color about their dreams—both their aspirations and their nighttime visions — ranging from combat-related nightmares and stress dreams to comically surreal fantasies.Ladd’s lyric adaptations of these accountsare juxtaposed with Iyer’s lush, potent music, and with the most important aspect of this project: first-person poetic contributions. Prominent on this album are Maurice Decaul, a writer who served with the Marines in Iraq, and Lynn Hill, who served in the Air Force and was tasked with remotely piloting drones over Afghanistan from a base in Las Vegas for two years. Their original, brave, from-the-gut contributions and performances became the soul of this project.As Iyer said in a 2012 interview for the NEA’s blog, “When you’re dealing with veterans in a performing arts environment, it’s not just a project that’s about them, or that’s depicting them… it is them. So you have the reality of their presence erupting into the work, kind of intervening in this artistic experience. So it’s a different kind of feeling, which, for me, was always an important component of this project.”The project’s stellar performers include guitarist Liberty Ellman, cellist Okkyung Lee, drummer Kassa Overall, and vocalists Guillermo E. Brown, Pamela Z, and Latasha N. Nevada Diggs.

Holding It Down: The Veterans’ Dreams Project was commissioned by Harlem Stage, where it premiered in September 2012. The performances were directed by Patricia McGregor.

“Like the best of all art, Iyer and Ladd have captured an experience too harrowing for words and given it life, and an unforgettably human one at that.”
— The Los Angeles Times

“… a story that’s concise, accessible and as serious as the nightly news.”
— Time Out New York

“Epic in scope, yet poignant in its emotional nuance…. With Holding It Down Vijay Iyer and Mike Ladd have offered a model of how artists can present social commentary that is profound yet unsentimental; complex yet focused; provocative yet inviting.”
— Sequenza 21

Described by The New York Times as a “social conscience, multimedia collaborator, system builder, rhapsodist, historical thinker and multicultural gateway,” composer-pianist VIJAY IYER has carved out a unique path as an influential, prolific, shape-shifting presence in twenty-first-century music. He received a MacArthur Fellowship, a United States Artist Fellowship, and a Grammy nomination. ... more

Bandcamp Daily  your guide to the world of Bandcamp